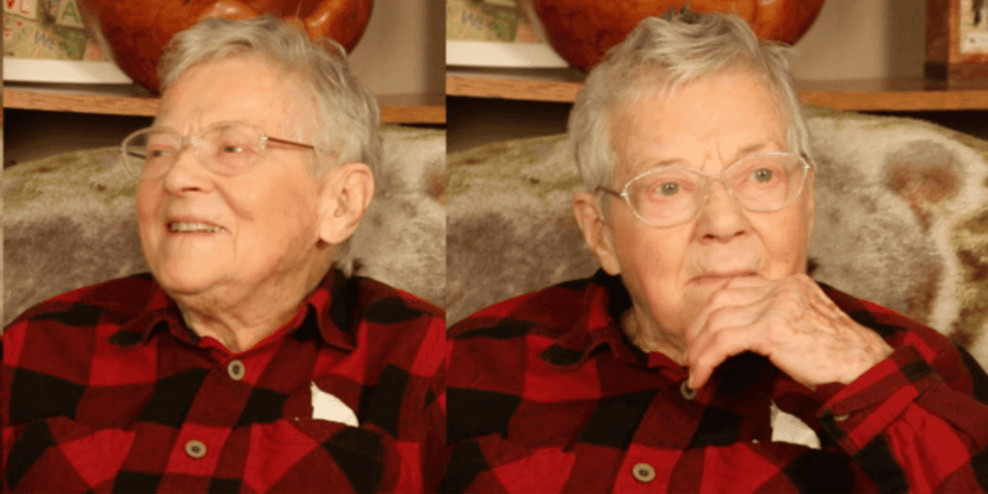 Everyone that knew Ruth Masters has a story

Ruth Masters is a legend. Anyone who met Ruth, could never forget her.

Imagine if you could divide people into two categories, those who spend their lives taking from the planet, and those who spend it giving back. Masters, who passed away in 2017 at the age of 97, fell into the latter category.

Ruth left a lasting mark on the Comox Valley and Vancouver Island. Born and raised in the Comox Valley in 1920, Masters was a World War II veteran, an outdoors woman at a time when climbing mountains and skiing was mostly a dude’s pursuit, and a tireless environmental advocate.

Among her many conservation convictions, she was a rigorous defender of wildlife, and in fact all things wild – plants and animals. In the 1990s, she was arrested for interrupting a Vancouver Island bear hunt. Around the same time, during the “War in the Woods” in Clayoquot Sound, she played O Canada on her harmonica while protestors were hauled away in RCMP vans. And over the years she doggedly defended Strathcona Provincial Park from corporate and government neglect.

Masters was opinionated and would never shy away from a fight. But she had a great sense of humor, was quick with a one-liner, and always compassionate.

Ruth grew up and lived most of her life on the Masters’s family homestead on Powerhouse Road. This forested acreage next to the Puntledge River, frequented by black bears, deer, cougar and a host of bird life, informed Masters’ lifelong sense of duty to the planet.

Any visit to Masters’ house was like a visit to the situation room of an environmental campaign being waged on multiple fronts. She was a legal secretary by profession but an activist to the core and a formidable writer of letters to the editor. Her kitchen table was piled high with newspaper clippings, photocopies, and hand-typed letters.

What made Masters special was her patriotism. Not that mindless flag-waving sort of nationalism that is the cause of so much trouble in the world, but patriotism steeped in respect for nature and community.

She once told a TV reporter that nobody could prevent her from defending Canada, whether they were wearing a police uniform or a politician’s power suit. Though she was a lifelong NDP supporter, she was no shrill lefty ideologue.

Masters believed simply that wildlife and their habitats need to be defended from the excesses of industry and development – full stop. But Masters wasn’t without humour and levity. She awarded many of her fellow citizens with “hero spoons,” her way of acknowledging the efforts of others to make the world a better place.

Master’s commitment to conservation went well beyond blockades and protests. In 2004, she donated 7.3 hectares of her family property along a bench above the Puntledge River to the Comox Valley Regional District. The Comox Valley Land Trust holds a conservation covenant to ensure it remains wild and undeveloped – forever. It’s a gift to nature and community. Considering the real estate frenzy underway in the Comox Valley and elsewhere on Vancouver Island, it’s hard to put a price tag on this protected space in the heart of a growing urban centre. It’s both priceless and a measure of this remarkable woman’s enduring legacy.

Masters was also a person of humanity and compassion, rescuing wildlife that she found injured on the road, and giving to the homeless. She even dug up and relocated native plants prior to land clearing for development, like she did years ago before the ground was broken for the Courtenay Wal-Mart construction.

For Ruth such small gestures were an embodiment of living your truth.

Ruth Masters will be remembered