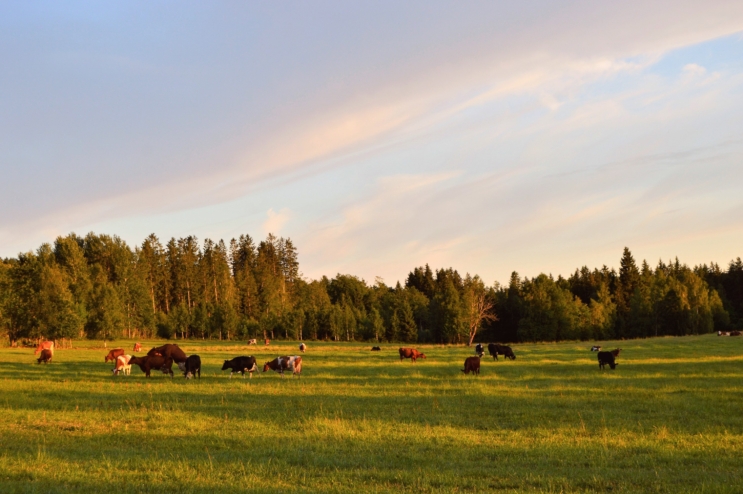 Edgar Smith and his brothers, Phillip and Doug, are 3rd generation cattle farmers. They have lived through some ups and downs.

It takes creativity and tenacity to farm anywhere, let alone on Vancouver Island. The Smith brothers learned that lesson decades ago, growing up on the 600-acre family farm on the Comox Peninsula that their grandparents started working in the 1930s between the two World Wars.

For the first 50 years of its life, Beaver Meadows was a conventional farm.

It was a product of the so-called “green revolution” that in the 1950s and 1960s introduced a chemical pesticide, hormone, and machinery-intensive approach to agriculture that promised to boost farm yields and profits.

But it came at a considerable economic and human cost. The family farm was tethered to agri-business suppliers and costs beyond their control. In addition, the health impacts of handling chemicals without protective equipment were still unknown.

Then in the 1980s, their father died from pancreatic cancer linked to prolonged exposure to pesticides. That personal loss, coupled with the collapse of important federal and provincial farm supports following the signing of NAFTA (North American Free Trade Agreement), prompted a shift in thinking at Beaver Meadows.

“We decided to move toward a natural systems-based farming,” Smith told the Capital Daily when he was preparing to let 300 head of cattle out of the barn.

The new term to describe their farm is “regenerative agriculture.” It’s a holistic approach that puts biodiversity, soil health, water quality, and climate change resilience at the core of crop and animal planning.

It means no more chemical pesticide, hormone and fertilizer inputs.

Smith said it took three years to free the farm from the soaring expense of imported grain, pesticides and other farm inputs. And over that time, the farm’s costs dropped 35%. In the ensuing years, Beaver Meadows attained official Heritage Dairy Farm status and Salmon Safe, SPCA, and Canada Organic certification. Smith calls it an “easier” way to farm.

“The hardest part is shifting your thinking and approach to farming,” Smith says.

A Taste of South East Asia at the Farmer’s Market

Tour of the Taps Part 2 – Campbell River and North Island