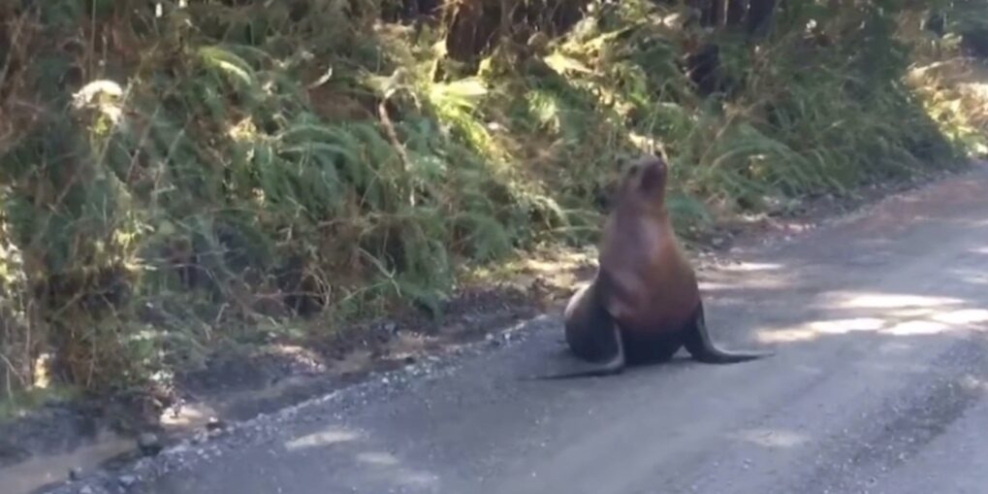 Big fella was kilometres from the water

When Greg Clarke first heard about the 600-pound sea lion that was hopping up the logging road, he wondered what people were smoking. According to CTV news, Clarke had seen elk, deer, bears, and cougars on his way to and from work at a radar station, but he had never seen a sea lion.

But then, on his way home a few hours later, there it was – a sea lion in the middle of the road. “It was probably the most bizarre thing I’d ever seen.”

In an interview with the National Post, Clarke said “I tried to go around him, but of course he didn’t like that very much. He charged my truck a couple of times.” Clarke suspected the sea lion was feeling threatened by the truck. “He started coming towards me pretty hard.”

Paul Cottrell from the Department of Fisheries and Oceans said it’s really rare to find a sea lion that far from the ocean. In an interview with the National Post, Cottrell said the animal “looked like a dog chasing cars.”

“Thankfully, he wasn’t blind or didn’t have any underlying health issues… there was nothing wrong with the animal,” Cottrell said. “He was acting like a sea lion except he was on land, seven kilometres from the ocean.”

Clarke says he and his friends suspect it swam up the old Holberg Inlet looking for something to eat and then came up the Goodspeed River as far as it could go. “Then for some reason got out or got confused and then he just started going up the road.”

While some people think the sea lion was lost, marine mammal zoologist Dr. Anna Hall said it’s also possible he was just feeling adventurous. Hall told the National Post that “[c]uriosity is one of their traits, they are interested in their surroundings.”

Cottrell from the DFO thinks the sea lion must have found its way home as no one has seen it since April 12. But if you do spot this new celebrity, call the DFO marine mammal response team at 1-800-465-4336.

Water Quality and the Problem With Private Land Loggers