Twitter isn’t normally a good source for key insights. But you know, sometimes it surprises us.

Dr. Eric Levi is an Australian surgeon. On Christmas Day, he tweeted the following:

That sums up the past two years of chaotic and often confusing COVID responses.

In a story for The Tyee, writer Crawford Killian put together six lessons we should have learned by now.

Decisiveness is important, but so is follow-through

When COVID first hit, lots of countries closed their borders. But the virus was already inside.

Vietnam went the extra mile—they closed schools and businesses right at the beginning and tested every person coming into the country. They reopened slowly, and for the first 18 months of the pandemic, life there was pretty normal. By May 2021, the country of 90 million people had less than 50 deaths.

But only about 65% of Vietnam’s population has been vaccinated. The Delta variant was more contagious. Folks who work in the country’s busy factories started getting sick. By Christmas, cases in Vietnam had soared, and more than 30,000 people had died from COVID-19.

Here in BC, at the start of the pandemic, Dr. Bonnie Henry acted quicker than other Canadian health officials. Schools and businesses closed. Young people were okay. But the province still didn’t protect old folks in senior care homes. Hundreds of people died preventable deaths.

This one needs a bit of tweaking. How about: science and politics don’t mix.

And Scientists may be experts in their field, but they’re not trained experts at communications.

The public has also lost trust in health officials because those officials won’t give us straight facts. They sound more like politicians than scientists.

They won’t give us bad news because they’re afraid we’ll freak out. They told us all the scientists agreed with each other even though we could see that they didn’t. They pick the data they like to support their own policies. And they put the economy ahead of people’s safety, even though we can all plainly see that people are the economy.

In BC, Dr. Bonnie Henry came out with vague statements about whether COVID stayed in the air. She said masks weren’t all that important. That was super confusing because so many other doctors said they are extremely important. That mismatch probably added fuel to the fire against government mask mandates.

Also, Dr. Henry let the politicians decide when she determined Site C and Coastal Gas Link worker camps could stay open. She knew people in the camps were getting sick. Those camps spread COVID to workers, neighbouring communities, and families back home.

COVID is a global crisis. We’ve never seen anything like this before. We need to work together, but you would never guess that from COVID responses.

For one, rich folks can afford to work from home. But if you work in a grocery store, you talk to people all day for not a lot of money. There is no work-from-home if you make burgers at A&W. And lots of frontline workers are immigrants and people of colour. It’s really unequal if the people who make the least amount of money are also the ones who have to put themselves in danger just to go to work.

In BC nursing homes, thousands of older people died because the government just ignored them when COVID hit. Why? Because old folks don’t make money for the economy?

Kids had to go to school in musty classrooms because someone early in the pandemic said only a few of them would die.

And, maybe worst of all, rich countries haven’t shared vaccines with poor countries. The tsunami of Omicron cases shows why that was a foolish choice. Places with lots of infections create new forms of the virus, and they then spread all over the place, including Canada.

Unless we get together as a planet, this nonsense could keep going for another 10 years.

A disturbing number of people have refused the vaccine as some bizarre symbolic statement of personal freedom. Anti-vaxxers have threatened health care workers and politicians. Some Conservative MPs refuse to say whether or not they’ve been vaccinated.

COVID-19 vaccines don’t guarantee that you’ll never get infected. But they help your body fight the virus so you don’t get so sick you die. But loud people have twisted this message to get more attention for themselves. They cause trouble because they like trouble, not because they “love freedom.” And they spread the virus to each other and to vaccinated people.

Our health care system is in crisis

Hospitals were at 100 percent capacity before COVID. After years of funding cuts, health care workers were tired and overworked. Then the pandemic hit.

The Canadian government predicts that, by 2028, Canada will need 35,000 more nurses than we’ll have.

There’s no going back to before

Many governments act like the pandemic isn’t happening. They try to gain power while everyone is distracted. So Russia threatens Ukraine; China bullies its critics; the US pretends it’s still the leader of the “free world.”

Countries are basically shells right now. Their leaders are clueless when it comes to the pandemic. There’s a lot of cheap talk about getting vaccines to poorer countries. But not a whole lot of action.

In the fall, we thought we could see the light at the end of the tunnel. Then Omicron hit because leaders thought countries were islands. Rich places hoarded vaccines because they forgot viruses don’t need passports.

Now we all know that the light we saw was a new train heading right at us.

The pandemic has changed our culture, our economy, and our lives. It might feel comforting to think things could go back to “normal.” But we’re all different now.

Instead, we should start working out what kind of new world we want to create. 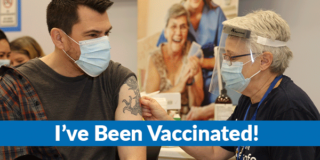 Quadra Gets the Jab

Dr. Henry Tells Us—You’re On Your Own

Happy Holidays, How About a New COVID Variant?