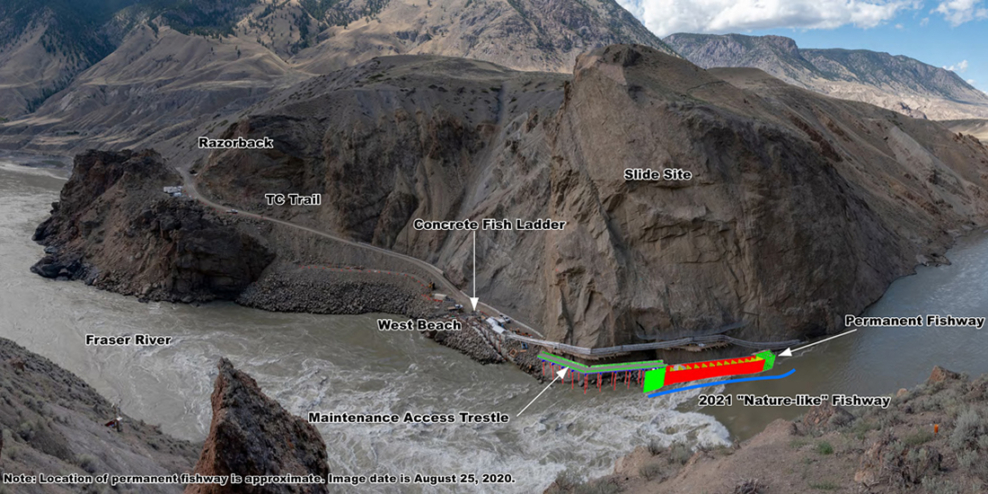 According to Fisheries and Oceans Canada (DFO), more than 22,000 sockeyes and chinook salmon have swum past the Big Bar Landslide this season.

The Big Bar Landslide happened in 2019 when tons of rock fell from a canyon into the Fraser River, 64 kilometres north of Lillooet, British Columbia. The rocks created a five-metre tall waterfall that salmon had trouble passing.

It was a huge problem for one of the West Coast’s most important wild salmon runs.

After three years of work, a response team from DFO has built a “nature-like fishway” to help salmon get past the waterfall.

And it seems to be working.

The Early Stuart Run looks to be about average. That doesn’t sound great, but it’s way better than the very low runs we’ve seen over the past few years.

The Early Stuart Run consists of more than 40 groups of sockeye that enter the lower Fraser River from late June to mid-July and travel immediately upstream to spawn in the Stuart River system.

The good news is that more fish should be on their way to the new pass soon. About 75,000 salmon were counted at the monitoring station in Mission, BC. It takes them roughly 10 days to reach the Big Bar Landslide.

There are plans to build a more permanent passage at the landslide site, but they are on hold. The work is dangerous, and weather and fires make the danger even worse.

Low water and warm temperatures are making things hard for migrating salmon. But hopefully, the new passage will let enough of them get north to spawn.