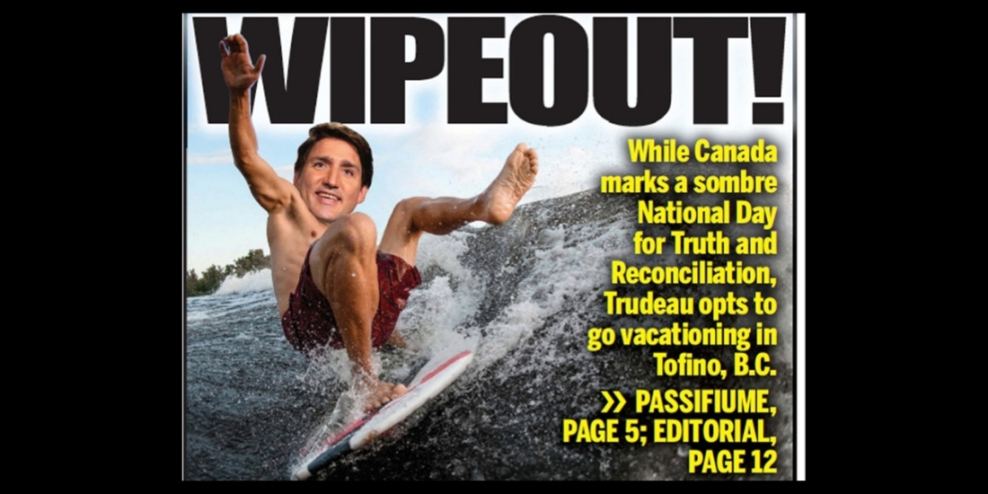 Oh, Trudeau. You either have no plans to run for public office ever again, or you’ve simply lost touch with Canada.

The ballot boxes had barely been flattened, and Justin Trudeau was already reinforcing his reputation among many as an entitled rich kid who says one thing and does another.

Instead of showing up for the first National Day for Truth and Reconciliation, Trudeau ducked two invitations from the Tk’emlúps te Secwépemc Nation in Kamloops to join them for the day and flew to Tofino for a family vacation.

“I did hold out hope that he would be here,” Tk’emlúps chief Rosanne Casimir told CBC News.

Tk’emlúps te Secwépemc Nation is near the former Kamloops residential school site, where about 200 unmarked potential burial sites were detected by a radar survey last May. The nation held an event Thursday that was attended by, among others, Assembly of First Nations National Chief RoseAnne Archibald and B.C. Solicitor General Mike Farnworth.

Trudeau’s own government created this national holiday. The fact that the Prime Minister – and his advisors – thought it acceptable for Canada’s leader to check out for the day and go surfing is beyond tone-deaf. So much for Trudeau’s promise that ” No relationship is more important to me and to Canada than the one with Indigenous Peoples.”

It’s a major snub to First Nations, who hoped this tragic year would signal a new future for reconciliation.

Nobody would begrudge anyone, let alone the Prime Minister, for taking a family holiday. Public life is demanding, and the families of politicians pay the price.

But Trudeau could have picked almost any other day jet out to Tofino, either before or after the National Day for Truth and Reconciliation. But he didn’t, and it calls into question his sincerity and integrity around all matters related to truth and reconciliation.

Yup, holidays are symbolic occasions, but this one is important.

Our Prime Minister should have known better.

Even the most self-serving of politicians should have anticipated the negative optics of taking a pass.

Not surprisingly, Trudeau is getting dumped on for this monumental snub.

And he deserves all he gets.

Now Trudeau’s left to apologizing, but that’s too little, too late.

Trudeau Is Lying About the Need for an Election