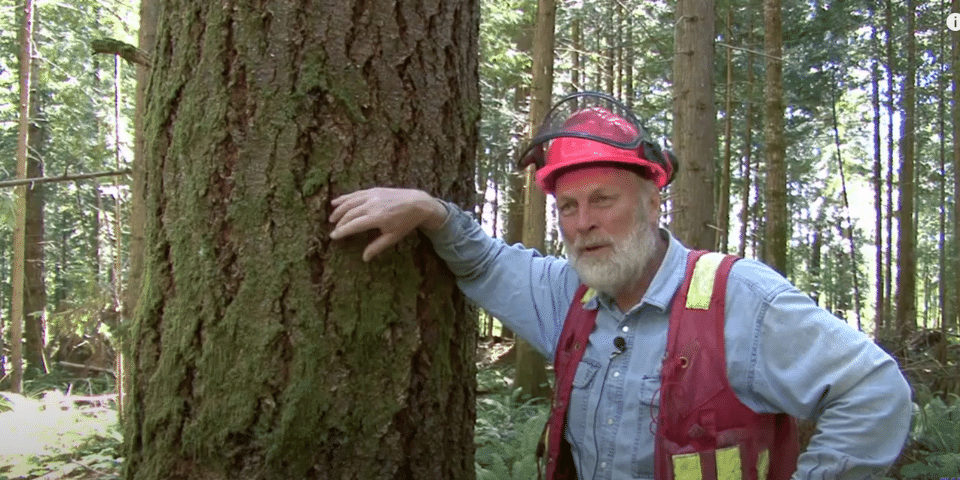 Photo Credit: “Living and Working in the Forest”

By managing for value, not volume, woodlot owner has increased standing forest and made a good living

For more than 30 years, Allen Hopwood has been sustainably managing a woodlot license on the slopes of Forbidden Plateau. Before that, he was a forestry consultant with a dream – to buy and manage a chunk of forest the way he wanted to. By 1985 he had saved enough money.

“I ended up buying 34 hectares here, near Courtenay, and then I discovered that there were 98 hectares of isolated adjoining Crown land,” Hopwood said in an interview for a documentary on sustainable forestry shot several years ago.

Hopwood applied to the forest service for a woodlot license and eventually got one in 1995. It covered 130 hectares of forest and included a mix of Crown land and his privately-owned forest. All logged previously in the 1920s.

In 1998 Hopwood began harvesting what was by then 2nd and even some 3rd growth forest. His goal was simple – to manage the forest in a way that would over time increase the value of wood on the woodlot. He has succeeded.

Over that same span of time, Hopwood had logged 14,000 cubic metres.

Today, there are roughly 850 woodlot licences held throughout BC, covering nearly 600,000 hectares. BC woodlots also support approximately 1,000 families, and overall, contribute 2 percent of all the wood logged in the province.

Though on paper it’s a small percentage, woodlots play a much more important role than just serving as a source of fibre for mills.

Unlike major logging corporations that are shareholder-driven and too often mired in conflict with local communities, woodlot owners tend to make good neighbours. It’s part of the package; they know their forests the way a homeowner knows their backyard.

Woodlot licenses are usually located near or around communities and are often used for recreation. For example, Hopwood’s woodlot is crisscrossed with a network of trails popular with hikers and mountain bikers. They get along, for the most part.

Woodlots are also important small businesses, contributing to the local economy. Woodlots support local mills and local value-added producers that otherwise struggle to source timber. When Hopwood cruises his woodlot, he’s often eyeing up prime Douglas fir for one of his local customers, Woodland Flooring, located 15 km away in Comox.

“My dream is to sell an individual tree, not a truckload of trees as a commodity,” Hopwood says. “This is prime wood, and it should be made into prime products.”

It doesn’t take a genius to notice the difference on the ground. Hopwood’s woodlot on the shoulder of Forbidden Plateau is a true working forest. An intact ecosystem managed for value, not volume. And where his forest ends, and the adjacent industrial forest begins lies a massive clearcut.

Water Quality and the Problem With Private Land Loggers

The Sour Legacy of the E & N Land Scam