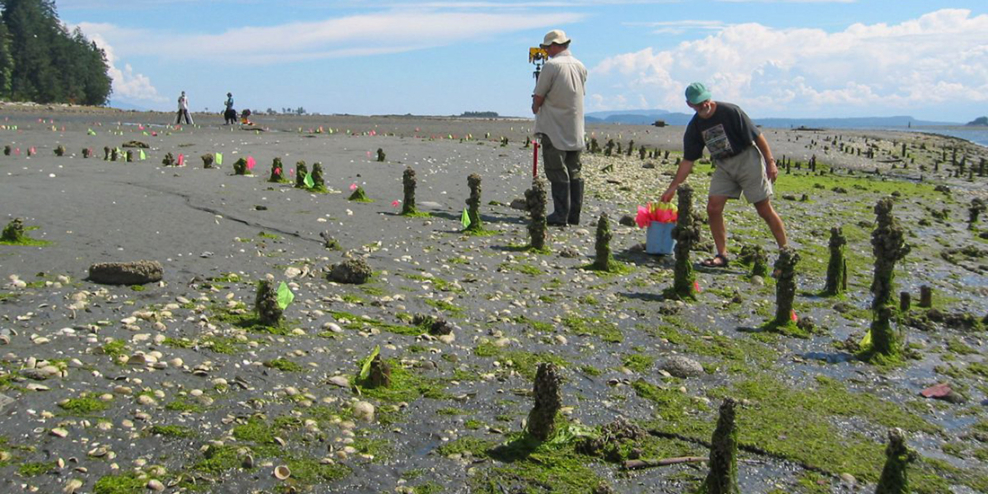 There had always been stakes poking up from the shore at low tide in the Comox Harbour. But nobody really knew what they were.

What were they doing there?

Who had put them there?

A mystery no one was really trying to solve.

That is until a mature student from Malaspina College named Nancy Greene started poking around. Between 2002 and 2015, she and her husband and other local folks spent years mapping all the stakes they could find. There were a lot of stakes.

Ultimately, Greene and her team found and mapped 13,602. The stakes clearly formed patterns, but it took Greene years to figure out just what those patterns meant.

Greene assembled archeological records and tapped into local indigenous oral history. One K’ómoks elder gave Greene a clue: her grandmother said the stakes were weirs that helped catch salmon, and each family was responsible for specific weirs.

After putting it all together, Greene concluded this was the largest ancient fish trap system of its kind in North America, or maybe even the world.

How many fish traps used to exist on west, north and central Vancouver Island?

How had the knowledge of such a huge, ingenious system vanished from history?

Deidre Cullon, an archaeologist and adjunct professor in the geography department at Vancouver Island University (formerly Malaspina College), told Brian Payton of Hakai Magazine it was a “perfect storm” of man-made and natural events.

“The smallpox epidemic of 1862 claimed the lives of half the Indigenous people on the coast of British Columbia. In that catastrophe, not only were keepers of knowledge lost; entire communities were abandoned. Lost, too, was the need for a high-production fishery—there were far fewer mouths to feed.”

“And then, right on the heels of that, the Canadian government chose to support commercial fishing for canneries,” Cullon told Hakai Magazine. The government made the traps illegal and sent their fisheries officers to destroy them.

This was followed by the invention of residential schools, which took Indigenous children from their families and put them in far-off boarding schools. The children were separated from their communities, language, and culture.

Parents could no longer teach their children their traditional knowledge. Eventually, the fish traps were forgotten.

So for almost a century, knowledge of this brilliant, ancient technology disappeared.

But then the big earthquake of 1946 loosened the sand in the harbour and swept some out to sea. Thousands of stakes started popping up.

The ancient technology was amazingly complex, but simple.

The fish traps used wooden stakes and woven panels to make fences along the shore. When the tide came in, the fish would swim up and into the fish trap, but they wouldn’t be able to find their way out.

Then when the tide went back out, the fish would be caught in the pool of water inside the trap. According to Hakai, the traps were a “Hotel California for salmon — they could check-in, but they could never leave.”

The old techniques have a lot to teach us about sustainable fishing. The way the fish traps were set up allowed people to adapt them to fit each local creek.

They also let people take the fish they needed and then release all the ones they didn’t need. They could let enough fish go to make sure the salmon population stayed healthy. A healthy salmon population would come back every year and keep the community fed.

Some First Nations in the Great Bear Rainforest are trying to bring back the ancient techniques to save the collapsing salmon population. For example, in 2013, the Heiltsuk Nation built a fish trap on the Koeye River.

The fish trap has allowed the Heiltsuk to assess the health of salmon and the whole ecological system.

They can now tag and release salmon, check up on how well they are spawning and surviving and — perhaps most importantly in a changing climate — monitor how stream temperature affects the salmon.

Maybe part of the solution to the salmon crisis facing Island communities was hidden in the Comox Harbour for over a century. Luckily a mature undergraduate was curious and determined enough to decode the hidden secret.

[EDITOR’s NOTE: The original version of this article did not include the name of Hakai article‘s author. This was an oversight and has been corrected. ComoxValley.News regrets the oversight.]