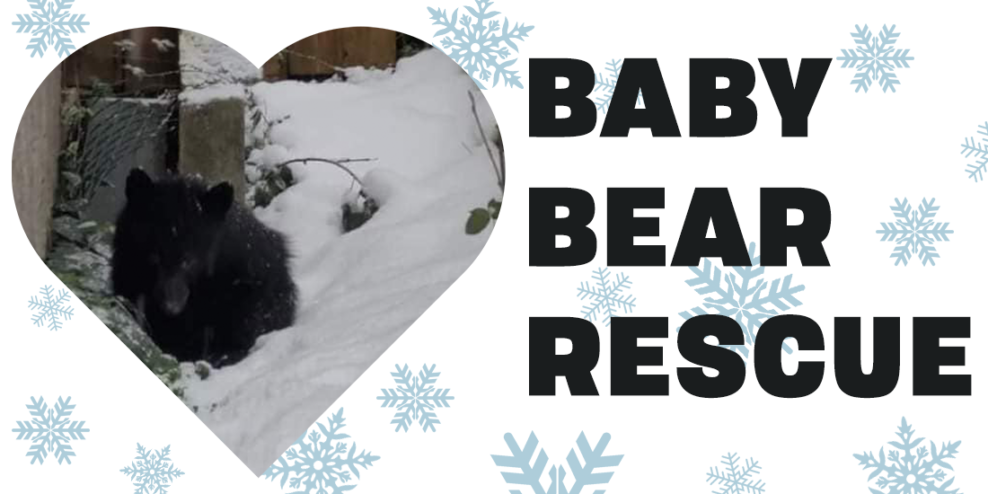 The cub was seen wandering without her mother for days

Thanks to folks with big hearts in Gold River, an orphaned bear cub is safe.

Kim Sevinski said her son was the first person to notice the bear. “He said, ‘mom, there’s a bear cub sitting by the house,” she told the Campbell River Mirror.

Black bears don’t generally hang out where people are. Vanessa Isnardy is from WildSafeBC. She told the Sooke News Mirror that they only go looking for food close to people when they can’t find any in the wild.

The cub spent a couple of days wandering the neighbourhood, and a few nights cuddled against the shed in Sevinski’s yard. There was no mother in sight.

So she hopped on Facebook to let others in Gold River know that the bear might need help. Kelly Chartier, another Gold River resident, knew just what to do.

Chartier is a volunteer with Wild Wise. They’re an organization in BC trying to reduce conflicts between people and wildlife. She’s also a huge animal lover. Friends on Facebook called animal welfare her “true calling.”

Sevinksi and Chartier called the BC Conservation Officer Services on December 17. They also kept an eye on the cub.

They knew the cub would be hungry because Gold River uses bear-proof garbage cans. But feeding wildlife is dangerous. Bears can get used to being around humans and eating human food. In many cases like that, the bear needs to be put down to keep people safe.

“No mom showed up, and this little cub spent the night burrowing in beside their shed — they said it was shivering,” Chartier told the Campbell River Mirror. “I don’t think (the cub), or I slept that night.”

Conservation Officers (CO) arrived on December 19, and there was still no mama bear in sight. According to Chartier, the cub ran up a tree. That was good news—it meant she was still strong enough to climb and still afraid of people.

The COs darted the bear so she could be safely rescued. Chartier’s husband Shane Robertson said on Facebook that the poor thing was only 20 pounds when the COs weighed her.

The cub will be cared for at the North Island Wildlife Rescue Centre for the next few months. They’ll ensure she is safe and fed, but with little human contact, so she stays wild.

If all goes well, the cub will be released next year. Sevinski is thrilled that she and other folks in Gold River could band together to rescue the bear.

“It’s an amazing feeling — the best Christmas gift ever.”