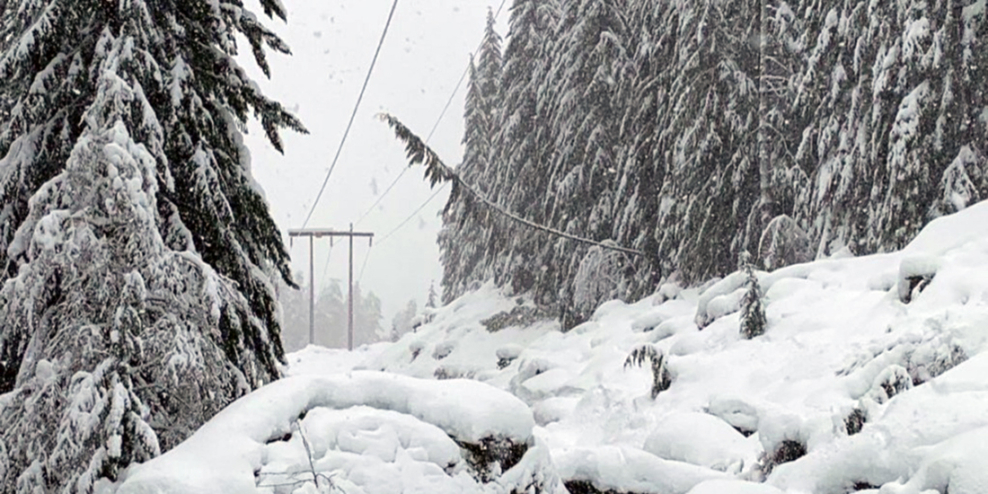 Thousands of people had no power for parts of last week. But no one had it as bad as the folks around Tahsis and Zeballos.

Wind and snow knocked out the only power line that brings electricity to the area. As a result, power was out for a week.

According to BC Hydro, the power line was damaged in several places. Trees blew over in the wind or broke under the weight of the snow.

The roads were so bad that repair crews had to go out in helicopters. But of course, the weather was so bad that no one could fly.

David Chisholm was a utility arborist who worked on that line. He said on Twitter, “[i]t’s one of the most challenging for rough, steep ground. You make a mistake in there, and you will be lucky to survive it.”

While the power was out, folks in Tahsis hosted warm meals in the rec centre. People in town could come to get something to eat and charge their phones.

In Zeballos, Totem Bar Contracting donated diesel to power the generator to keep the internet up.  A Zeballos hotel also offered up hot showers.

It definitely wasn’t comfortable having no power for a whole week in the snow. But folks pulled together to help each other through it. And when the power finally came back on, everyone celebrated.

But because the area is still pretty landlocked, Air Nootka is offering to bring supplies in on the flights. They’ll even bring takeout from Gold River!

It’s exciting to finally have the power back on. The only problem is, there’s another storm on the way.

More heavy rain is supposed to fall between Tuesday and Thursday. The BC River Forecast Centre is warning folks all over the Island that rivers could flood in the next few days.

The region needs long-term solutions when it comes to keeping the power on in bad weather. But, unfortunately, BC Hydro doesn’t have any other than trimming the trees.

But places like Port Hardy are starting to look at building their own small-scale hydropower.

It won’t be long before smaller places like Zeballos and Tahsis start looking at building their own.